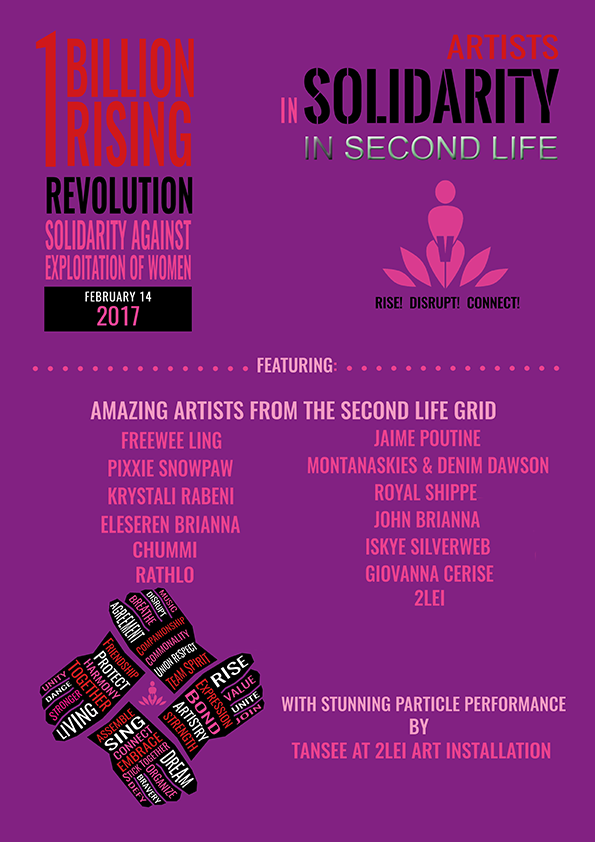 All about 2Lei at One Billion Rising in Second Life 2017

Jaime Poutine
A lifelong resident of Dallas, Texas, Jaime Poutine paints in a variety of “real life” methods and brings them to SL for the enjoyment of others. When she’s not hiding under a rock, you might find her listening to live music in SL while she works on her latest project. She thrives on creating abstract, colorful glimpses into the heart of her emotions and experiences, both in this world and out.

Eleseren Brianna and
Eleseren is a new Artist in SL, though she has exhibited several times in 2012/3 in Inworldz with Dreamz & Visionz group. She is primarily a model and Designer in SL, and just beginning to branch out now into photographic art, though primarily still with a Fashion focus. She is also Editor and Curator of The Edge and COO for Kultivate Magazine.

In real life she trained originally as an Illustrator, with a B.A. (hons) in Illustration from Camberwell School of Arts & Crafts. She is also a trained Couture Designer Dressmaker and ran my own bridalwear business for several years, and a trained Art Therapist.

John Brianna
John is a Real life and current United States Marine Corps Officer, who did two tours in Iraq and one in Afghanistan in support of Operation Enduring Freedom.

While deployed in the war zones, he would take photos to show his view of the wars and the scenery. He loves black and white photography, mixed with sepia and vintage tones in order to channel a vintage look.

FreeWee Ling
This is FreeWee’s third appearance as an artist at One Billion Rising. She has been an artist working in virtual worlds for nearly 10 years. Since 2010 she has been the Curator of the UWA 3D Art & Machinima Challenges sponsored by the University of Western Australia in SL. In 2015 she received an Endeavour Fellowship from the Australia Department of Education to spend four months in residence at UWA.

She is currently the recipient of a LEA Artist in Residence land grant (LEA17) where she is working on scenes relating to a rl art book project.

“Nevertheless she persisted”
FreeWee’s installation is in response to recent events in the United States Senate. On 7 February 2017, US Senator Mitch McConnell inadvertently created a powerful meme for the new feminist resistance movement. He unfairly silenced senator Elizabeth Warren on the floor of the senate for impugning the reputation of Senator Jeff Sessions during a floor debate on Sessions’s suitability for appointment to US Attorney General. McConnell stated, “She was warned. She was given an explanation. Nevertheless she persisted.” The phrase “Nevertheless she persisted” has become a social media meme and a rallying cry. The full story can be read here: https://goo.gl/GBGflD

The installation requires Advanced Lighting, including projected lights, to be enabled.
FreeWee has made a T-shirt with this motto, which is available free in the givers in her installation. (Women’s sizes M, S only).

iSkye Silverweb
In Real Lufe, iSkye is Deaf. Her first language is American Sign Language (ASL), but she is fluent in English and somewhat so in Spanish, and learning Italian. She relies heavily on text to communicate in Second Life.

While not a professional, fulltime artist, she has been drawing since she was 11 years old, and started painting in her teens. Having always been a voracious reader and blessed with a vivid imagination, it was impossible to resist experimenting with writing and painting and drawing all through high school and university. While she started with a major in fine art, ultimately her life’s path diverged from it as a profession. Yet her passion for and deep enjoyment of art have always been the way to find her innermost self, time and again. Art centers her. It reminds her of who we all really are, and, it has been her saving grace in difficult times.

She has had an active online life since the late 80s/early 90s, but when she discovered Second Life in 2009, it changed her world. All of a sudden, she was able to not only interact, she could do meaningful things with other people, and be a part of communities and, she could CREATE!

Empowered with text, prims and mesh, textures and colours and light and motion, she loves the things we can do in a virtual setting that are simply impossible in real life. All of this combined to spark ideas and urges to create and build and collaborate with others in bringing form to feelings in beautiful and sometimes not so beautiful but meaningful ways.

iSkye says: “It is a gift to do this. Gifts are meant to be shared…I am grateful for the opportunities I have had and look forward to many more.”

Montana Skies (Skye)
Montana is an avid lover of nature in both worlds and have been taking photographs to capture the beauty of Second Life for years. She is always blown away by the creativity in Second Life and the beauty that is created by imagination.

Recently, with the support of her amazing friends, she has decided to share my visions. She continues to learn how moods and life changes can influence how we express ourselves as she expand her art to reflect more than just landscapes and beauty.

Montana says: “I hope you enjoy my work and that it brings you a smile and a moment of peace.”

“Art should comfort the disturbed and disturb the comfortable.”― Banksy

Pixxie says: “I take part to help comfort, inspire, and empower those who are, or have been victims of abuse. I take part to try and disturb the people who are comfortable with the injustice than women and girls have to face every day, all over the world.”

Krystali Rabeni
Krystalli is an accomplished traditional and 3D digital artist in Real Life and Second Life, winning various awards and taking part in charity and awareness events around the world. When she isn’t glued to her computer screen or canvas she enjoys spending time with her family and writing. She hopes to one day graduate from the ‘University of life’ and live out the rest of her days on Planet X!

Krystali’s work can be found in myriad of public and private art collections both in Real Life and Second Life and has been seen in numerous exhibitions worldwide. She currently lives and works in the UK.

Join Us at One Billion Rising!

Find out all the latest information about the worldwide campaign here.

A Special Message to OBR in Second Life 2015

From Eve Ensler, author of The Vagina Monologues and the founder of One Billion Rising.

This is Eve Ensler and I am filled with joy and awe at the stunning One Billion Rising in Second Life. Wow. It is simply stunning, mystical, political, gorgeous and inspired. My deepest gratitude, admiration solidarity and love,
Eve

See the video about One Billion Rising for Justice: 2014

Information about past One Billion Rising in Second Life events

Our most recent tweets!